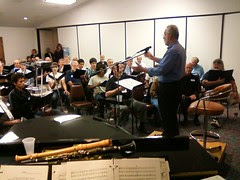 1120101646a
Originally uploaded by oamcsinger
OAMC held its kick-off rehearsal at East Salem SDA Church on Nov. 20. It was great to see many friends, and start making some new ones among the many young men from about five SDA academies. We're looking forward to seeing these young men at future rehearsals and performances.

We're looking forward to our traditional spring concert festival, as well as concerts early in the year at Milo Adventist Academy, in Days Creek, Oregon, at Walla Walla University later next year, and plans are just beginning for a mission to South Africa in 2012.
Posted by Sam Vigil Jr. at 1:17 PM No comments: